Today we met up with our tour guide for Rome, Amy for the first of our planned adventures.
we stepped back in time , way back in time to around the third decade BC

Hadrian's Villa was commenced around the second and third decades of the 2nd century AD.
At the time of the construction of this Villa Rome was a city teeming with people, officially they say the population was around 900 000 but that wouldn't have included the slaves and illegal immigrants from other countries so the population was probably closer to around 1.5 million people. So as you can imagine it would have pretty crowded, busy and noisy. A lot of the wealthier Romans built villas outside the city. The emperor Hadrian had a particular passion for architecture so he continually improved his villa, throughout his life right up until the time of his death in 138 AD. 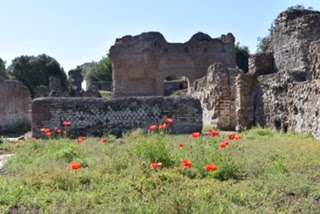 The villa is predominately in ruins now but thanks to computer technology and a wonderful book Amy had we were able to see what they believe the buildings would have looked like.
The building below is from the area known as the Hospitalia, and were the guest rooms of the Villa. 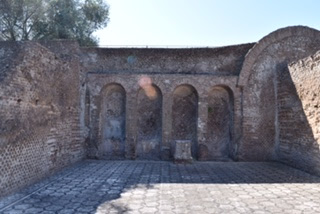 The above image is believed to have been a shrine room, to Gods or deities or the emperor  I love how the mosaic floor is still so intact which is pretty amazing considering  the age of the villa. 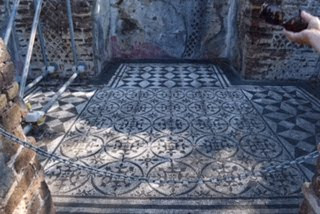 Another floor in the villa, lots of patchwork / appliqué inspiration here . . . . 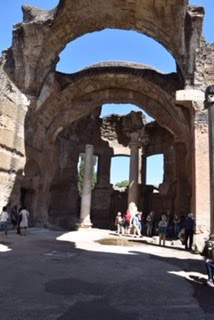 Hadrian's Villa had three bath area's the "thermae with Heliocaminus" , the "little thermae" which was believed to be used by women and the " great thermae". These bath areas were very social areas and were used for gym workouts, massages and lectures. They believed that despite the title the little thermae , the women's area, was no less, grande than the mans area.
The above image is part of the "great thermae" In Hadrian's time these bath areas included a palestra ( open air gym ), a calidarium (hot bath area) , tepidarium ( tepid bath ) , laconicum ( sauna room) and a frigidarium ( cold water pools) the above image is of the Frigidarium. 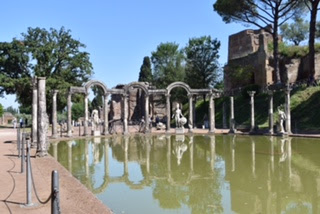 This area was known as the "Canopus" and would have been a entertaining area, with people milling around socialising. At the opposite end of this pool was an enclosed area , which would have been used for official dining. 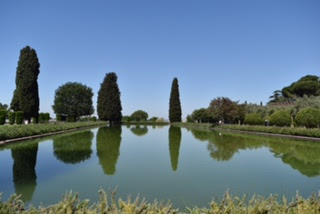 This area is known as the Poecile, and was originally surrounded by a wall and a partial roof allowing Hadrian and other residents of the villa to exercise at any time of the day either in the sun or in the shade as they chose. Hadrian's believed strongly in the importance of a healthy body, makes a healthy mind.
The left side of this area was built up to provide a large flat area and this structure created what was called the hundred tiny rooms , which are believed to be the accomodation for the slaves. Throughout the complex is a series of tunnels ,called crypto portico's , it is believed the slaves used these to enter and leave the various rooms, therefore reducing their visibility within the Villa.
It was very interesting and because of the images of how they believed it looked ( both digital and in a book our guide carried) it allowed us to visualise the grandness of this huge villa. 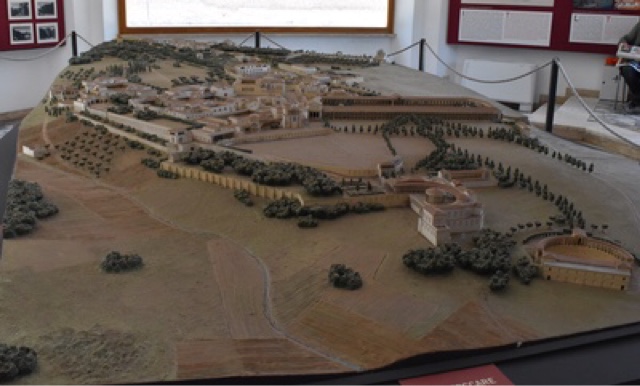 This is a model of how they believe the complex looked.

Was conceived and commissioned by Ippolitto D'Este the son of Lucrezia Borgia and Alfonzo D'Este. The villa itself was originally a Benedictine monastery, Ippolitto was used to a much more luxurious lifestyle, and he found the monastery a bit spartan so he set about redecorating it and creating its spectacular gardens filled with the most amazing fountains, all powered by the flow of the river. 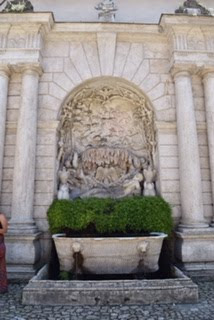 This was originally a fountain, dedicated to Venus. This fountain is within the courtyard of the Villa. The villa itself was beautifully decorated with frescos throughout, most of which were inspired by the surrounding area.  It is believed that a lot of the marble, statues and decorations used in the Villa D'Este were " borrowed" from Hadrian's villa which had been abandoned many many years
previously. 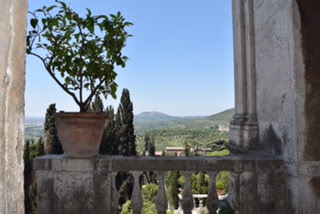 The view from the portico of the villa across the valley. 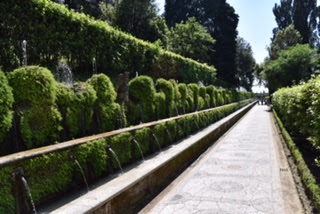 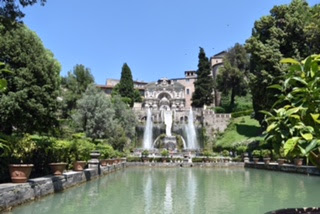 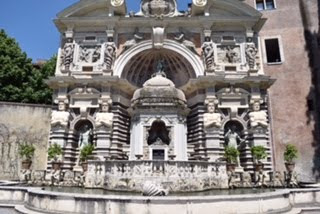 This is the fountain of the organ , if you zoom in you can see organ pipes within the centre area of the fountain. At certain times of the day the organ plays a selection of tunes. What is spectacular about this is that the organ was totally hydraulic and the "organ" was not played by a human, but by gust of air created by water flow. It was truely ingenious and was at the time and continues to be one of the wonders of the Villa. 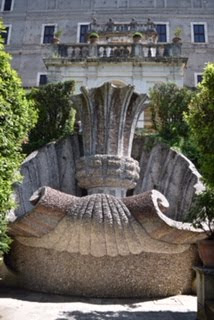 The fountain of the Bicchierone ( large drinking glass) was designed by Gian Lorenzo Bernini, was actually added almost a century after the gardens were created. Originally it was much taller however as it obscured the view of the portico it was reduced in height. 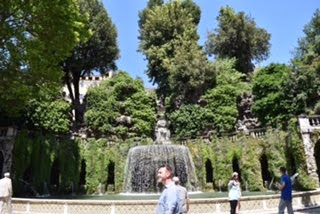 This is the fountain of the Ovato (oval) this was a popular area for relaxing and socialising, you can see the foliage covered columns, behind these columns was a walkway where people could enjoy the
cool air the water provided and perhaps a lovely secluded spot to meet with a beau. The statues are all significant but to describe them all would make this already long blog post even longer.
The two sites we visited today were both so magnificent I took so many photos that I could easily have created several individual posts for each site.  This post is really just a snapshot of both sites.
These sites truely came to life because of the enthusiasm of Amy, she explained in great detail what was at the villas and how they were lived in "everyday" during their periods.
It was a wonderful day and a great introduction to the beautiful historical sites of Rome.

If you are interested or need a tour guide in Rome or for other areas in Italy you can contact
Amy at her website listed below.
http://www.luxeassociatestravel.com/ 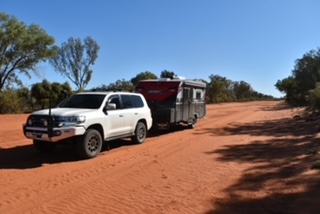 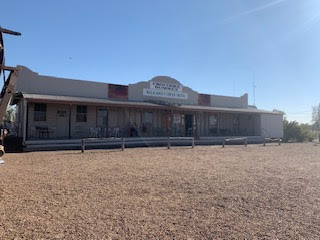